How time flies!  J is now 6 months old, I've been so busy I haven't had a chance to post.  It's definitely been an experience to say the least.  Things got pretty tough about a month after J was born.  S was fine at first, but started having issues adjusting to his new baby brother.  Combine this with the holiday season, and poor S was really out of sorts.  He gets weirded out and overwhelmed by new or different situations (such as parties with a lot of people, opening Christmas gifts, etc)  He usually reacts by acting out or getting really hyperactive.  Well, he acted out for about 2 months straight.  I don't even have any pictures from Christmas, because he opened one gift, then started running around the tree kicking everything.  It was really upsetting for both of us - what happened to our sweet little boy?  Luckily, things calmed down after the holidays and now he adores his little brother.  He's going to be 3 this summer (!!!)  He's a wonderful kid, very bright and happy.  The child care situation has been a challenge, more on that in another post.

J is doing great as well.  He is 6 1/2 months old and developing wonderfully.  He's a very happy, smiley and easygoing baby.  He sleeps pretty well - he doesn't nap very much but tends to sleep from 7:30p - 5:30a without waking up.  He's much easier than S was, maybe because we're a little wiser!

I had a rough time of it as well.  Starting shortly after J was born, I would have days where I felt absolutely horrid.  Just in a terrible mood and really feeling like I couldn't cope.  Picking fights with the Bunny, yelling at S, just feeling like crap.  Horrible intrusive negative thoughts - nothing about harming the baby or myself but lots of "you're a lousy mom," "the boys deserve better," etc.  I had major issues with my milk supply and had to start supplementing when J was a few weeks old, this made me feel like a failure.  It got worse when I went back to work full-time in January.  To add to the mix, my law firm bank accounts got audited (something that happens to every NJ attorney eventually) and that caused me so much stress that I couldn't eat or sleep.  I lost about 10 lbs in 3 weeks and my milk started drying up.  Finally in early February, a colleague convinced me to talk to my OB about it - he diagnosed me with PPD. He put me on 50mg zoloft and I finally started feeling better after about 3 weeks on the medication.  I'm off the meds now, exercising and feeling 100% better.  Looking back, I realize how bad it was.

I won't lie, having two children in diapers is challenging to say the least.  It's very hard on us and our marriage, but we've gotten into a routine and now we have wonderful in-home childcare.  Looking forward to a fun summer with our boys! 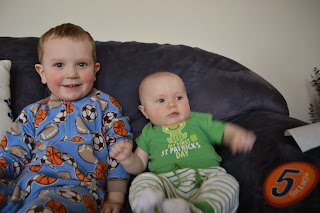